“When I was invited by Voyages to Antiquity to be a guest lecturer on their mid-sized cruise liner “The Aegean Odyssey” during their Singapore to Bangkok cruise in December 2012 I was of course delighted, but at the same time I admit to feeling a little apprehensive. I have lectured too many organisations and institutes both here in the UK and in the Far East but usually have the opportunity to get to know my audience.

Singapore on our arrival

Whether it be a Women’s Institute in a Village Hall in the wilds of West Sussex, a Camera club keen to hear my thoughts on apertures and F stops or a group of students keen (or otherwise) to expand their knowledge on their way to a degree, I try to pitch at the right level. When I sat down to research the company I discovered that it had previously specialised in tours of the Mediterranean and that the Far East was a departure from their normal tours. Voyages to Antiquity are intrinsically a cruise company that specialises in cultural trips for retired or semi retired passengers from all walks of life. They concentrate on the art, the culture and the civilisations of their destinations and whist I enjoy all of these things I am by choice a Natural Historian not a connoisseur of the arts. I am more at home in the jungle at midnight up to my knees in mud and leeches usually with a camera in one hand and a torch in the other. Cruise lecturing seemed to be a world away from my usual outings. What should I talk about? Would they like or to that matter even understand me, as whilst I am immensely proud of my Midlands heritage I am at times also conscious of my rather broad “brummy” accent.

Then there was of course the etiquette required on board ship. Having consulted a number of friends who had travelled on such trips before, I was apprehensive as to the dress code on board. Dinner jackets? Black ties? It was all very daunting. So, conscious of this was I that I decided to contact the company to ensure they were aware of my field of expertise. My fear was allayed after a very pleasant meeting with Ann Carr in London and an assurance that my skills were exactly what the company was looking for. At ease I returned to the South Coast to prepare my lectures and begin planning the trip. Christmas must be a particularly difficult time to acquire lecturers as I would imagine that people have family and plans. My wife and I are fortunate in this respect as our extended families are spread far and wide and with no children we normally spend Christmas at home with our two cats. The idea of escaping the cold and miserable wet weather in the United Kingdom appealed to us both and as we have a wonderful lady who looks after our cats during our frequent trips away we felt that the opportunity was not to be missed. 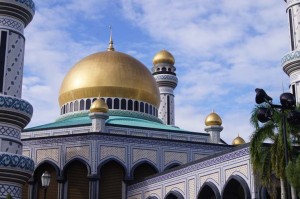 Time passed and we began in earnest preparing for the cruise. All too quickly 2012 seemed to disappear and we found ourselves about to depart for Singapore on a cold, wet and windy December morning. I had settled on four lectures that I felt would fit in nicely with the cruise itinerary. I would begin with the story of Sir James Brooke, The first White Rajah of Sarawak and although this particular cruise was not visiting Sarawak, it was visiting Brunei and Sabah and at the time when Brooke ruled over 30,000 headhunting Dyaks, Sarawak was still part of the Sultanate of Brunei.

My second lecture would tell the story of Alfred Russel Wallace, possibly the most famous man that no one has ever heard of. He was a great English naturalist that had travelled extensively in the Far east , he had written an excellent book on the area and without whom Charles Darwin might never have published his groundbreaking Theory of Evolution. I have always enjoyed history and whilst the history of a particular region interests me, what really fascinates me is the history of the people that shape an area. I always seem to settle on the underdogs of history. The nearly men, those individuals that stood in the shadows of others and often faded in to the mists of time without so much as mention in a fourth year history lesson. Brooke and Wallace are just two such men. Both deserve to be remembered and honoured but both have been overshadowed by the deeds of others. In Brooke’s case – by Stamford Raffles, the founder of Singapore, and in Wallace’s case, of course, by Charles Darwin.

For my remaining two lectures I would choose the effect that man has had on the ever decreasing rainforest of the region and in particular the fast disappearing wildlife of Borneo. My final lecture would see me return to yet another “underdog”. The Orang-utan. If ever there was a creature that deserves our respect and help then surely this gentle of all the primates is such a beast. Hunted to near extinction in the 19th Century and then evicted from its natural habitat in the 20th Century by man’s devastation of its home, this near relative of man has been pushed to the edge of extinction. My lecture aimed to introduce the passengers to these beautiful giants and hopefully inspire them to look closer at the efforts to save them from oblivion.

My lectures prepared and honed to my satisfaction, we began our trip. A trip that would take us first to Singapore and then to the Sultanate of Brunei. 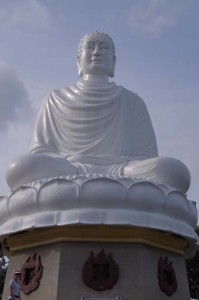 Then to the Malaysian state of Sabah, before travelling to Vietnam where we would visit the magnificent Hai Duc Pagoda of Nha Trang.

We would arrive at Bangkok, the vibrant never sleeping city of Thailand. A city that exudes charisma and one that the casual visitor will fall in love with in a breath. Finally we would end our journey with a visit to the unbelievable temples at Angkor Wat in Cambodia. The written word cannot begin to describe these monuments to the past. I would stand dumbstruck before the carved faces of the Bayon temples and open-mouthed at the sunset at Angkor Wat. It was my reason for coming to Cambodia and it will be the reason I will return one day.

In the following blog I hope to take you on our journey and by doing so inspire you to make the trip yourselves for there are wonders to behold in the East. I fell in love with the East so, so many years ago and it is an affair that continues today. I hope it will continue for many more years to come and that you too may find such a love.”