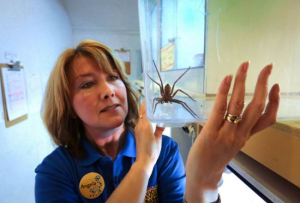 Angela with a Huntsman spider
Who are we and what do we do?
See Angela on Good Morning Britain here:
See Part Two here
Ray and Angela are both very experienced naturalists. Having travelled extensively around South East Asia, Ray now spends most of his time writing about, lecturing on or photographing the nature around us whilst. Educated in the Midlands, Ray and Angela now reside in the picturesque county of East Sussex. They are members of a number of Societies including the British Tarantula Society, The British Arachnological Society and the Amateur Entomological Society. Ray has had a number of photographs published in various journals. 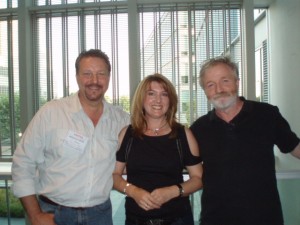 Having studied arachnids, insects, mammals and birds in many countries the Naturally Wild Company has developed a wealth of knowledge on British, Asian and South American wildlife and they have strong familiarity with the flora and fauna of Borneo. Through his amazing photographs and video footage Ray can bring to life the sights and sounds of nature for your organisation. Over the last decade Ray and Angela have returned to South East Asia to photograph more spiders and insects. Ray has published a number of articles and photographs and has recently been employed on a number of cruises as the ships naturalist. 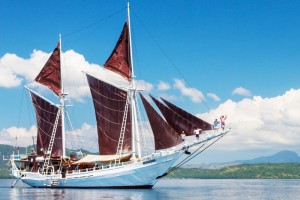 Angela is a recognised expert on the large so called Bird eating spiders and has appeared on a number of radio and TV programmes. She is often called upon to comment on British Spiders. 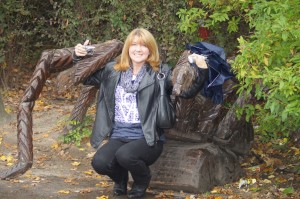 See Angela On Youtube. ( Yes I know its in Portuguese but hey you get the drift)
http://www.youtube.com/watch?v=4Nfu_qOUJvk